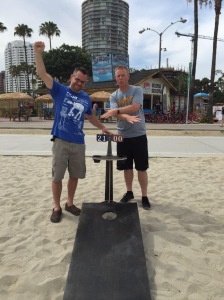 This past week I attended the NAESP National Convention in Long Beach.  The conference focused on best practice and the learning was epic!

Prior to the conference, Ben Gilpin and I collaborated on an event to further connect conference attendees.  Our goal was to cultivate relationships that would propel into the actual conference sessions and beyond.  We extended an open invitation to all principals and school leaders attending the conference, and partnered with NAESP to blast the invitations out using e-mail, social media, and other web tools.

We had a great turn-out and met many colleagues who we were able to connect with throughout the conference…this was a HUGE victory (unlike the staged photo above).  Checkout the highlight video below to see more of the action and meet the 2015 National Bean Bag Champions!

Click HERE for an interactive version of the video via TouchCast.  (The end of the video includes a link for the new Studio-in-a-Box.)

I am an elementary principal and author in Minnesota. You can connect with me at www.BradGustafson.com or on Twitter via @GustafsonBrad
View all posts by Dr. Brad Gustafson »