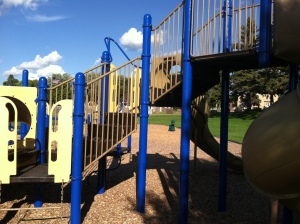 Every child needs a champion. It only takes one. Each of us has the power and potential to be that one. One adult. One teacher. One paraprofessional. One custodian or principal or cook. Just one.

I was recently reminded of the difference that just one person can make in the unlikeliest of places. Our family has a tradition of combining bike rides with park-hopping. (We’re blessed to live in a town that has a multitude of fun parks for our kids.) This weekend my wife and I were seated at a park bench chatting when she shared that our son had requested the park we were at. He called it the “dinosaur park.” As I listened to my wife my eyes scanned the landscape at a loss for why our son would refer to this park as a dinosaur park. I glanced at our five-year-old son who was trotting along the wood chips and noticed his back was arched and his arms were tucked near his chest similar to how a T-Rex would run.  I figured he probably called this the dinosaur park because he liked to pretend to be a dinosaur at this particular park (???).  My mind meandered as I questioned my own logic…my son likes pretending he’s a dinosaur EVERYWHERE, so this could not be why he chose to name this particular park the dinosaur park.

Then it hit me. Off in the distance stood a lonely green dinosaur toy. It was a modest spring-loaded ride that must have been a remnant from before this park was updated with newer equipment.

This got me thinking…kids really don’t need an entire prehistoric theme park experience to name something the “dinosaur park.” They just need one connection. One memory. One thing that makes a difference to them. The most improbable piece of playground equipment earned this park its nickname in my son’s eyes, and I will join my son in forever calling this park the dinosaur park.

The same concept applies to our schools. One person can change the entire outlook and trajectory of a child’s life. Each of us has the power to be the dinosaur. In a world that is moving at a frenetic pace, each of us has the option to connect with a child…to make a memory…to build a bridge.

Whether you are a teacher, principal, administrative assistant, school board member, or serving on a school’s food service team…you just might be the person that your school is named after in the eyes of a child. Never forget that. Embrace the magic and all the responsibility that comes with this truth. Be the dinosaur. 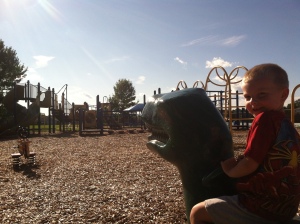 This is my son riding his favorite toy at the “Dinosaur Park.”

Thoughts on Literacy & Leadership in Education