← My Friends Don’t Know
My Pastor was Right. Again. →

Where Ideas Go to Die

Good idea. Bad idea. Things are not always black and white.  Even the best ideas (or intentions) can lead to bad things if the culture of a school is not conducive to innovation.

It’s easy to say that we will do what’s best for kids, but more difficult to discern what is actually best when considering the potential impact on different stakeholders.  Is research-based best practice the gold standard that we should never deviate from?  Or is there room for new and untested ideas in education?

I tend to believe that kids deserve both, and so it pains me to know that there have been times that I’ve been a barrier to innovation.  I know that I have made decisions that stifled progress.  For example, this past school year one of our teachers approached me with an idea.  He wanted to have our entire school (approximately 860 students) meet outside for an all-school photograph to commemorate our 50th anniversary…and he wanted the photo to be taken from a few hundred feet in the air.

I thought the idea of an aerial shot taken from one of our school’s drones sounded cool, but my visceral response was one of hesitancy.  I tried to dissuade him because I thought that getting nearly 1,000 people (students and staff) outside at the same time would be too intrusive on teachers’ busy schedules.  If I’m being completely honest, I probably also wanted to avoid undue criticism from anyone who was not super excited about the idea.

My perspective was skewed towards protecting the “routine” so we could keep moving forward.  After all, what is best for kids is protecting the learning environment and their routine…right?!

Fortunately, the teacher who wanted to add this neat drone video perspective was pretty passionate about the idea.  I quickly realized that a school’s 50th anniversary may actually be grounds for disrupting the routine.  Long story short, we all met outside and it turned out to be some of the most amazing video footage I’ve ever seen.  The best part is that our students are still raving about it. 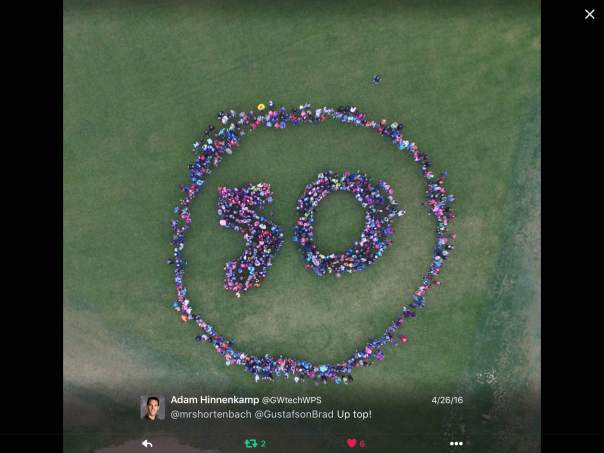 When I stare at the picture above it’s hard for me to distinguish their faces, but I do remember their reactions.  They loved it.  After watching the drone video they even started to think differently about things.  I think we all did.  This served as a reminder that there is an opportunity cost to what we say no to.  Even if it is under the guise of “what’s best for kids.”

Most people do not wake up in the morning wanting to dash another person’s dreams…oftentimes we do it unknowingly.   I pray that “What’s Best for Kids” is not where ideas go to die.  I pray that I am not the person who kills them.

**Yes! The Adjusting Course blog is moving to a new home. Hop over to www.BradGustafson.com to subscribe to my new “ad free” blog. It will literally only take six seconds…unless your internet is slow…or you type slow…

I’ll keep cross-posting here for another month or so to give everyone a chance to switch over to the new site.  (I’d love your feedback on the design too.)

I am an elementary principal and author in Minnesota. You can connect with me at www.BradGustafson.com or on Twitter via @GustafsonBrad
View all posts by Dr. Brad Gustafson »

← My Friends Don’t Know
My Pastor was Right. Again. →

Thoughts on Literacy & Leadership in Education